Reviews are in! What are people saying? Click the image below to find out and leave a review of your own! 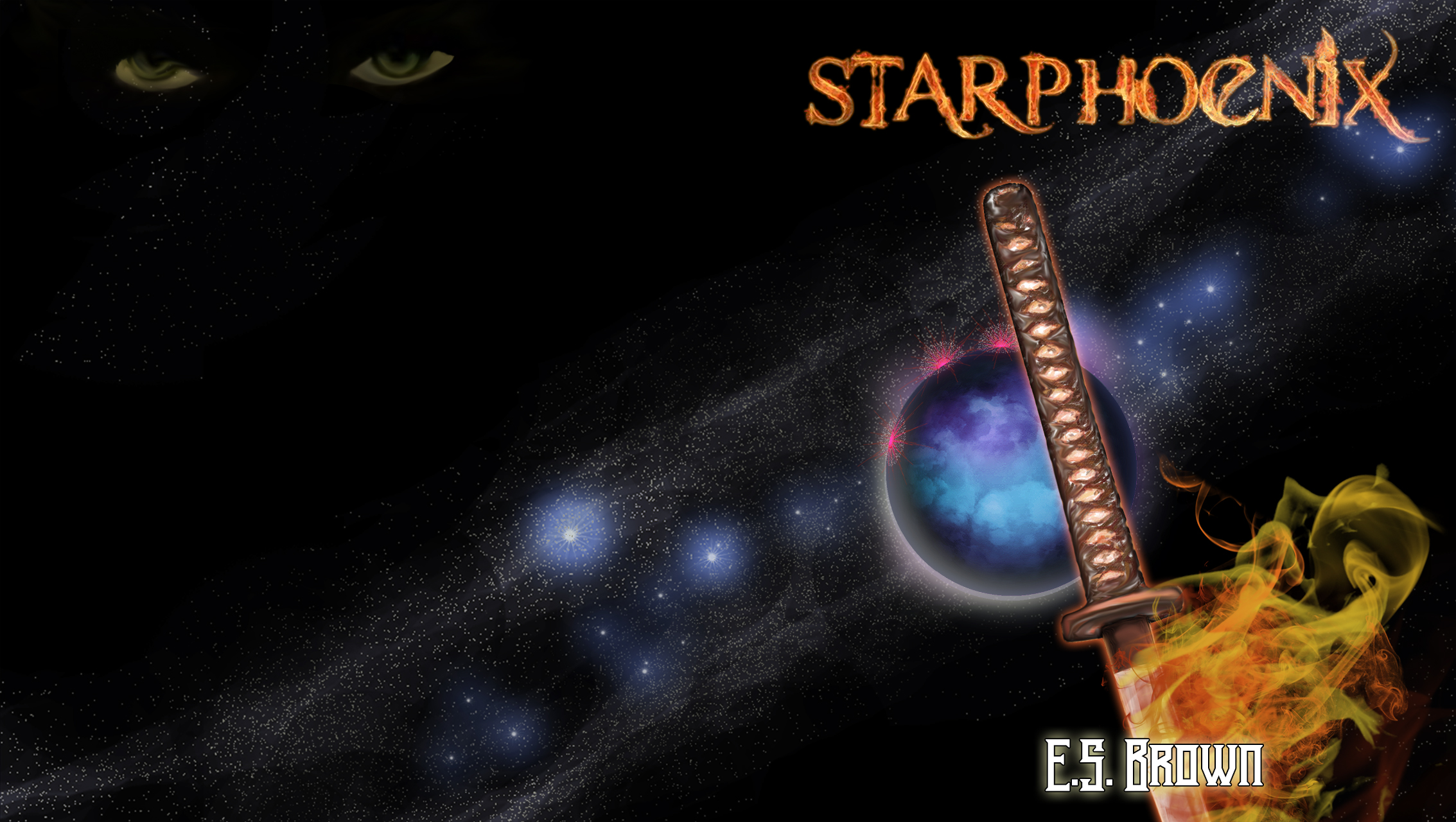 “E.S. Brown’s debut novel, STARPHOENIX, is a rich tapestry of Star Wars-based sci-fi and adventure, but the astute reader will recognize the parallels to the events of September 11th and the conspiracies which led to two wars and today’s present-day Middle East. A must-read!”

A galaxy teeters on the brink of war over dwindling energy reserves. An act of terror on a distant planet leaves half a million people dead. A world leader is murdered by a mysterious cyborg assassin. Maxim Starphoenix is the one person who can bring those responsible to justice. If his own government doesn’t kill him first.

STARPHOENIX is available now from Line by Lion Publications!

Click the BUY link to get your copy today!

Check out the book trailer:

And now here’s an excerpt!

Jourdin Makk maneuvered the fully-loaded luggage hovercarrier around the back of the spaceport, toward the passenger starliner parked at Gate 17 of Fahroom Interplanetary Spaceport. Today was his fortieth birthday, and for decades he’d dreamt of nothing other than being a starpilot. Those hopes were dashed his second year in college when his hoverskiff was broadsided by another transport. Jourdin’s left leg was crushed and he was left with a permanent limp. Though he desired to stay involved with the starliner industry, a jaded outlook on life brought on by a bout of depression had deteriorated his interpersonal skills, and he could only achieve the most basic career paths.

Every day the same boring routine – wear the orange jumpsuit, load the baggage, drive it to the starliner, unload the baggage. I should be the one flying the ships. Damn gimp leg of mine!

The sound of a starliner streaking overhead from an adjacent docking platform caught his eye. The distraction held his attention a bit too long, and when he looked forward again, he was surprised to see a longbed freight hauler hovering in the path ahead of him. He slowed his carrier as two men dressed in the familiar orange jumpsuits stepped off the transport and walked towards him.

“What’s going on here?” Jourdin stopped his vehicle completely. He winced from the pain that shot through his injured left leg as he climbed out. “Oversize cargo like that needs to be taken to the south end of the spaceport where the freight flies out. These here are passenger transports.”

The two men stood in front of him. They had dark circles around their chrome-colored eyes and Jourdin recognized them as being of Erimosian descent.

“Change of plan,” said the one nearest to Jourdin as he lunged forward, grabbing Jourdin’s arms and pinning them behind his back.

“Hey! What are you doing?” Jourdin struggled to break free from the larger and stronger Erimosian.

The second man stepped in front of Jourdin and thrust a black-carbide blade deep into his chest. Jourdin’s skin turned purple and the veins in his neck and face protruded to the point of rupturing. He emitted a quiet gurgle and exhaled one last breath before slumping to the ground.

One of the men returned to the freight hauler and entered it from the rear. Moments later he piloted out a transport similar to the luggage carrier. Unlike the exposed baggage on Jourdin’s transport, its cargo was covered by a large beige tarp. After the other man maneuvered Jourdin’s carrier into the cargo box and sealed it inside, the Erimosians stuffed the handler’s lifeless body under one side of the tarp.

The men said nothing to each other before going their separate ways. The replacement luggage hovercraft headed toward the passenger transports while the longbed cargo carrier went in the opposite direction. The baggage transport stopped at the rear of the starship at Gate 17. The bay doors to the starliner’s cargo area slid apart and the hovercraft floated into the empty hold, swallowed whole as the doors closed behind it.

The orange-suited baggage handler exited the transport and moved alongside the hovering carrier through the dimly lit compartment. He lifted the side of the tarp, folding it up and out of the way. Jourdin Makk’s lifeless eyes stared at the imposter starliner employee. Behind the crumpled body was a computerized workstation with a long elliptical chrome platform resting flat on top.

The handler opened a small panel on the terminal above the dead baggage worker, revealing a keypad and display. He entered a code into the console and the display flashed:

The imposter employee unzipped his jumpsuit and removed it, revealing a simple pair of slacks and a long sleeved button-down shirt. He took a flight ticket from an inside pocket of the orange uniform before stuffing the discarded clothing around Jourdin’s body. The stranger then reached around the side of the workstation and grabbed a flat, black satchel before lowering the tarp.

The man worked his way to the fore of the cargo bay. He exited the dark hold and found himself in a brightly lit refreshment prep area. He blinked his chrome eyes a few times as they adjusted to the light.

“Sir?” a female flight attendant who rounded a corner into the prep area asked. “Can I help you?”

“Uh, no. I think I came back too far.” He handed his ticket to the woman. She studied it before giving it back.

“A little. You’re actually seated just on the other side of this wall, in the back row.”

The man took the ticket and moved out of the employee area. Assimilating among the other passengers, he took his seat on the aisle, his zippered bag resting on his lap.

The flight was booked to capacity. The last passengers made their way on board and, after getting their carry-on baggage squared away, took their seats. The flight crew did their final inspections, then prepared themselves for takeoff. The ship’s pilot made his welcoming announcement as the large starcraft lifted from the flight deck.

The Erimosian passenger glanced about the crowded cabin, tuning out the pilot’s voice and any conversations around him. He muttered to himself – words reminiscent of a religious chant in a language other than the Galactic Standard spoken throughout most of the galaxy. He looked past the passengers next to him and out the window. The midday sun shone brightly and the blue Elauran skies were clear. The ship rotated as it lifted higher. A drop of sweat fell from his forehead and onto the satchel on his lap.

“Flying make you nervous?” asked the woman seated next to him. “I used to get scared, too, but I got used to it.”

The man stopped his murmuring without acknowledging her. The woman shrugged off the conversation and turned her attention back to the story displayed on her digital reader. The headline read “Nomar’Chi Rhetoric Concerns Galactic Lawmakers.”

The nervousness within the man grew. With a shaky hand he unzipped the bag and pulled out a device resembling a handheld communicator unit. He activated an application and entered an access code. A command prompt appeared:

He touched the onscreen confirmation.

The concealed platform on top of the workstation in the cargo hold rose as a mechanical arm attached to it from underneath was activated. The ovoid disc turned onto one of its long sides as the arm extended outward, pushing it away from the workstation beneath it. The platform radiated a silvery glow and the tarp burned away.

A new command blinked on the data screen:

The man took a deep breath and glanced at the woman sitting next to him. She provided a polite smile before returning to her reading.

The Erimosian closed his eyes and pressed the button. A loud hum emitted from the cargo bay and traveled through the vessel. Some of the passengers wondered aloud about the strange sound.

An immense vertical plane of intense energy discharged from the perimeter of the platform in the hold. It sliced through the entire ship, cleaving the spacecraft in half. Explosions rocked the vessel as electrical components were cut, the largest occurring at the rear of the ship as the primary thrusters ripped apart. Passengers caught in its path were cleanly dissected wherever they were touched. The Erimosian terrorist who set off the device was the first such casualty. His body was severed from head to groin and each part was carried away by different halves of the separating ship.

The surviving passengers screamed as the two parts of the doomed vessel veered away from each other. One dropped sharply and exploded onto the edge of the docking bay platform. The other careened at an angle and smashed into the spaceport control tower, causing it to erupt like an enormous firework. As the remains of the starcruiser fell away, the top of the burning tower pumped a column of black smoke into the otherwise serene skyline. The sounds of emergency alarms and rescue vehicle sirens became one with the wails of people nearby who were shocked and injured by the destruction…

Read more NOW by subscribing to my free monthly author newsletter! Once you subscribe you will get immediate access to the opening chapters of my novels VAMPOCALYPSE and STARPHOENIX! Click HERE to subscribe now!